I was featured in a Blog Post… check it out. Thank you, Stephanie Haynes!

What Happens When You Don’t Let Go and Rest

(as originally posted on Stephanie Haynes.net)

Nobody likes to feel alone. I’m at the top of the list. I want sisterhood in my struggle. I want company in my misery. I want someone to break through my walls, look past my mask, and weed through the… weeds… to get to my heart. But I want the other person to do all the work so I don’t have to explain or discuss any of the feeling or thoughts that I may or may not be having. In fact, I would prefer not to share anything at all.

That’s why it’s so weird that I recently wrote a book, a memoir no less. Not just any memoir, but a memoir that sounds like fiction novel interrupted by movie scenes. A weird “disjointed” storytelling adventure about a very private person told in a most un-private kind of way. And it’s over 300 pages long. Yikes.

It’s overwhelmingly frightening to be out in the open, vulnerable and exposed. Since my book release, I’ve been having daily moments of “yes, I did it!” quickly followed by anxiety ridden trips to the bathroom. It’s never easy to put it all out there. It’s scary, like that dream where you show up to gym class totally naked kind of scary.

What’s the book about? Good question. I think the best way to sum it up is to say that it’s the story of an overly private, independent, over-achieving former athlete who learned that life is too hard to do alone. It’s better to ask for help.

It all started when a doctor confirmed that my new-found inability to move my feet… or sit up… or roll over… or do anything really… was the result of a separated pelvis. Yes, you heard me. I had a separated pelvis. Ouch. It was particularly painful since that very same separated pelvis was the final blow of an already difficult pregnancy and an excessively exhausting labor and delivery. The hard part was supposed to be over, but instead it was just beginning.

How was I, a stubborn, overachieving independent, former athlete going to recover from this kind of permanent injury that was going to change my life forever? Not very well I’m afraid. I stayed strong, I persevered, but I forgot one very important thing. I forgot how to let go and rest.

Here’s a “scene” from my movie/book that shows exactly how much I wanted to rush the healing process. I had microscopically begun to recover from my separated pelvis. Did I give my self the space I needed to continue my recovery? No. I did not. Instead I did this…

TITLE: Never mess with a New Yorker, no matter what age she is.

CAMERA HOLDS on view of city street on Upper West Side of NYC. The lights of the city have just come on. The soft sounds of people sitting outside at the recently opened sidewalk cafés rise up to the sky mingling with the soft spring breeze. The traffic noise is light, muffled, almost nonexistent. The sidewalks are damp from a recent rain.

MOMMY notices an elderly woman walking about a half a block ahead. Elderly woman is hunched over, almost into the shape of the letter “C.”

FROM MOMMY’s POV: camera zooms in on the older woman with the laser intensity of a warrior.

TARGET SCOPE focuses on the back of the older woman.

And so the race was on.

MUSIC: Inspirational running music (perhaps something like Chariots of Fire)

CAMERA toggles back and forth from elderly lady to MOMMY who are both now “running” in slow motion as if sprinting in an epic race.

CUT TO: real-time to show elderly lady walking down the street with the café patrons ignoring her and everyone on the city sidewalk going about business as usual.

CUT BACK TO: MOMMY who is still sprinting on track with café patrons cheering her on from the “stands” which are really just the sidewalk café barriers. You can even see the names of some of the restaurants as she “runs” by.

Exaggerate both are moving at same slow-motion speed even though MOMMY’s imagination makes it seem like they are both sprinting.

Suddenly MOMMY doubles over in pain and is forced to stop. In her imagination it’s like she blew out a hamstring just like a world-class sprinter might. She grimaces in pain, tries to keep going but can’t and falls onto “track.” She crashes to the ground with a face of defeat and agony.

Elderly woman sprints across the finish line while the crowd at the tables cheers wildly. The spectators pour onto the sidewalk to congratulate elderly woman encircling her with crazy celebration. They lift her up on their shoulders. She pumps her fist in victory.

MOMMY stands in the middle of the sidewalk as the city goes on around her. She is doubled over and breathing deeply with sweat running down her face.

Because I wanted to better before I was truly ready to be better.

Being left in dust by that old lady was just the beginning for me. That scene in my book took place in Chapter Eight. I had nineteen chapters to go before I made my turn toward healing. But, in every chapter, the lesson I needed to learn remained the same.

There’s so much left to do!

It’ll never get done unless I do it!

I can’t! I have to keep fighting!

I have a race I need to finish…

Okay, but just for a moment…

And then, of course, I hop back up. I try to grab it all back. I try to take control again.

Sit down. Be still. Rest. 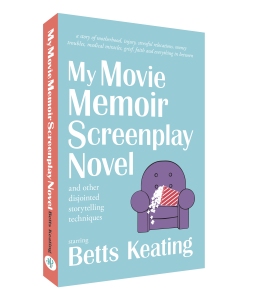 Read more of Betts Keating’s story in her memoir, My Movie Memoir Screenplay Novel, available for purchase at amazon.com.

One thought on “Learning to Let Go and Rest”